Concerned about the risks posed by COVID-19, Laurent Duvernay-Tardif, lineman for the Kansas City Chiefs, shared on social networks his decision not to play in the next season in the NFL.

The athlete, holder of a doctorate in medicine admired by many Quebecers, made the announcement Friday night in a long message posted on his Facebook and Twitter accounts.

He thus becomes the first NFL player to retire from the next season for preventive reasons linked to the pandemic.

The McGill University graduate was able to avail himself of an "opt-out" presented by the NFL to the League Players Association. Members who do not wish to participate in this season have until August 3 to make their decision, which will then become irrevocable.

According to two anonymous sources from the Associated Press, Duvernay-Tardif will not receive his full salary in 2020, but will still collect the sum of US $ 150,000.

NFL camps are set to begin next week, with league medics approved. The Houston Chiefs and Texans rookies have been on site since Monday. “I am confident that the Chiefs medical team has a solid plan in place to minimize the health risks associated with COVID-19. However, risks persist and, as a future health professional, I cannot afford to become a potential vector of transmission in our communities, ”says Laurent Duvernay-Tardif. 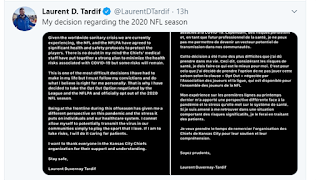 “This decision was one of the most difficult I have had to make in my life […] My experience on the front lines last spring gave me a different perspective on the pandemic and the stress it puts. on the health system, ”he told his subscribers.

The Quebec athlete lent a hand to the staff of a Montérégie CHSLD last spring. At the end of April, he had been assigned to duties as a patient care attendant and a nurse.

Duvernay-Tardif won the Super Bowl last February with the Chiefs. In February 2017, the athlete signed a five-year contract with the team.