(New York) NFL Commissioner Roger Goodell has written a letter to fans where he discusses plans for the NFL planning to play, amid the pandemic.

“COVID-19 will continue to present a major challenge in almost all areas of life. Football is no exception, ”Goodell wrote. 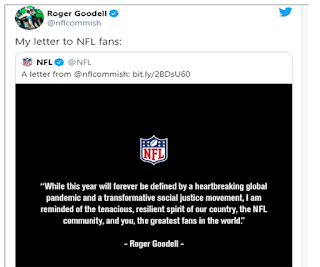 “Every step of the way, we have focused on the safety of players, coaches, staff, supporters and our communities. Our planning has followed the lead of medical experts and public health officials, including the CDC, the White House task force, governors and state health officials. "

“Safety remains our first priority; this commitment will remain paramount as the players return to the field. "

Veterans are starting to report to training camps this week.

The league and the players reached an agreement on a return-to-play plan on Friday, after all exhibition games were called off.

Club complexes were closed by Goodell at the end of March; they were reopened this summer, on a cautious basis.

“The NFL will be different in 2020,” adds Goodell. Players and coaches will be tested for the virus regularly, including every day for some time. Everyone in the team environment must follow rigorous health and safety protocols to protect themselves and others. "

“In the event of a positive test, strict regulations will be enforced to isolate and treat that person and to contain the virus before it spreads. "

“The sidelines will be different, and public health guidelines will help determine if fans will be allowed into the stadiums. These adjustments are necessary to reduce the risk for everyone involved. "

The NFL has chosen not to create a bubble-like environment like the NBA, WNBA, NHL and MLS have.

Major League Baseball is in trouble with a plan similar to the NFL. So there are additional concerns, related to what the NFL has planned.

“This week the camps are kicking off and quickly the NFL season is upon us,” Goodell wrote. In what has been an extremely difficult year, we hope to bring some optimism, which we so badly need. "